I saw this on Natalie Kroll's  Blog today. Here are the rules:I will tag my people on facebook and let them know :)
Enjoy! :)
WIP - The Light Tamer
“Hi I’m Jessie and I’m new to all of this too.  I ask that you forgive my ignorance if I don’t have an answer to your questions.  Believe me; I’ve been on a quest for the last few weeks, trying to figure out what all of this means.  Recently I had a lunch meeting with Mrs. Ward, the principal of Parca.  She educated me to several things, but the most complicated is the story on how we all began.”  I clear my throat and take a sip of bottled water before going on.   “As philosophers have said many times, you can’t go forward without going back to the beginning.”

Tuesday MeMe
Teaser Tuesday
"First he'd fix this, get Sullivan through the dose, and then they'd go to Eden.  It'd be better to face her wrath than show up with a mortal on Touch."


A Touch Morbid - by Leah Clifford
Posted by Devyn at 2:05 PM No comments: 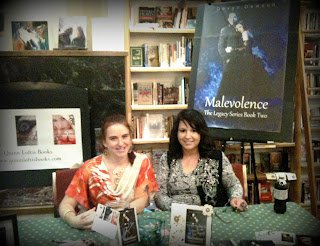 Avoid  book signing with an ax murderer.
On Feb 28, 2012 - I had the great opportunity to meet Quinn Loftis, Jaz Primo and Janice Grove.  Quinn and I spent most of the afternoon together and then she admitted her husband was slightly worried that I could be an ax murderer.  I mean sure we've never really met in person...but we've talked on the phone, we've texted...and honestly I never put her in my possible 'ax murderer' online friends.  I've thought about the risks that we made... I mean, sure we don't have publicist that actually set things up and I could have lied about the situation with the bookstore.  I'm very happy I passed the test... it would have been hard to put that on my resume.  Just sayin'.  I won't mention that I went to her hotel room and changed clothes... not in front of her or anything, sheesh - give me credit.
What did I learn about the signing - well... if there is a fireplace, ask the store to turn it off HOURS prior to setting you directly in front of it....on a 75 degree day.  Make sure you have signs and set them up.  I saw Jaz brought some book stands.... good idea!  I'm buying some this weekend.  If you order a sign as large as mine, make sure you have a large car or truck.  It isn't fun worrying about being decapitated while driving down the road with a sign at the back of your neck.
It was incredibly fun seeing all of my family and friends that I haven't seen in years.  I hope they all had a chance to talk with the other authors (I come from a large family and I've been gone 9 years).  I hope everyone had fun.
The Light Tamer is coming along well, but I think it will be delayed by two weeks.  I'm looking for TEN BETA readers between the ages of 12-18, hopefully female.  Email me if you're interested.  devyndawson@yahoo.com
Posted by Devyn at 3:44 PM 2 comments: