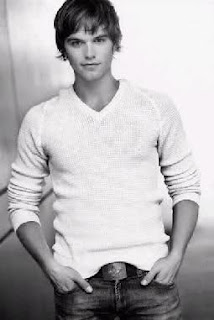 Abel Casey
Here is a candid interview with Abel & Pru - the two lead characters in The Legacy of Kilkenny - I hope you enjoy!
Abel:
1. Have you ever fantasized about attacking Julie while in wolf form?  *Laughing*  No, I can honestly say I haven’t.  Maybe now I will.
2. The first time you "flew" into a tree and then jumped back down, it didn't end well for you or your ankles. Have you since been able to successfully jump without breaking any bones?  Oh man, yeah, that was totally embarrassing.  We called in a stuntman to train me on how to land without hurting myself.  Don’t tell anyone, but I actually went to Missouri for a week to attend a circus class.  They put belts around my waist and lifted me high in the air, swinging me around like a balloon until it was time to come down.  Dolly told me it made me ‘graceful’ when I jumped.  If the pack finds out about that, they will never let me forget that I’m graceful. *grins as he rolls his eyes*
3. Do you miss your friendship with Shane, or do you think things are better since you and he drifted apart? Do you ever wonder if you'd have ended up being like him if you hadn't met Pru?
I miss Shane all of the time and maybe when he gets out of rehab I will invite him out to the farm.  Chrissy helped me organize an intervention for him and I paid for this really amazing rehab place in Florida, their success rate is very high.  No pun intended.  He should be out soon.  I can say without a doubt that I would never do drugs.  I can’t believe he did, but I’m confident he will be fully recovered and will stay away from the drugs.  At least I hope so.
4. When you're a wolf, what's your favorite animal to hunt? Do you like to hunt alone or do you have more fun when other werewolves are with you?  I was a little self conscience about having people around in the beginning but it’s getting easier.  We have this rabbit that Pru insists we can’t harm it, but we can play with him.  He is a fast little sucker, man he can weave in and out of the trees like nobody’s business.
5. Does the idea of bumping into the Kilkenny Pack again, and Patrick in particular, make you feel nervous or excited? Are you ready to flaunt your new status as the Great Wolf, or do you still need more time to get used to it?  There is a pack convention next year in Ireland, all alphas will be there.  I think I’ll be ready, I’ll cross my fingers.  I believe that convention takes place in the third book.  You’ll have to wait and see how it goes. 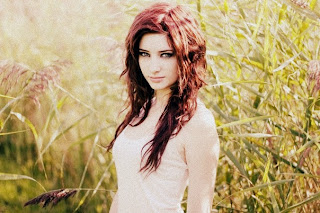 Pru Phelan
1. Did you ever decide on a good way to kill Abel? What was the most bizarre death-plan you ever came up with for him?  There is a rare spider that the bite will make a person look as if they are dead and it can be as long as a week before the person comes out of it.  The problem was, it would be very painful for him in the hours it takes before the venom immobilizes him.  We scratched that idea but came up with one we were going to use on him after the holiday weekend.  I’d talked to Alecia, the head of a local coven and she made a concoction that would do the same thing.  It was a potion he would drink and the spell would make him look dead to anyone that sees him.  I still have the potion in my room. *smiling* It might come in handy.
2. You drive a pretty sweet car, a 2011 SS Camaro. Did you pick this particular car out for yourself, or was it a gift? Have you always had amazingly fabulous cars to drive, or was this your first car?  Oh, my Camero?  It was a gift from my parents when I graduated.  It is the first car that is all mine.  I had free use of the farm truck and it wasn’t a fancy one like my dad’s.  No, it was always caked in red mud and reeked like horse dung.  I would have been happy with anything that didn’t smell like a farm. *laughing*  Seriously, I would have been.  I hear that Oakley and Bryon picked out the Camero and convinced my dad it would be perfect for me.
3. Sparks fly when Shaynie moves into your house. Do you think things would have been so heated between the two of you if you'd grown up with a sister or two? And for that matter, how different do you think you'd be if you'd had a younger sister growing up?  Shaynie?  Yeah, well she is special. (clears throat) Shaynie is perfectly aggravating and at the same time she is sweet as syrup.  I’m still on the fence about her, but I will say she is a master at her craft.  I’ve always liked the fact that we are an all male pack.  I guess it would have been nice to have someone to do girl things with, I just made the boys play dolls.  I did!  Ask them!
4. If Oakley weren't in the picture, would you allow yourself to enjoy, or give into, the dreams you've been having lately about Arien? Or do you think they'd still be horribly disconcerting? Because I've gotta say, for a mean, evil vampire, he's pretty hot. Don't you think so too?  He may be pleasing to the eye, but he is not a good vampire, not that I think any of them are good, but he is far from it.  We found Allie’s journal after she left and I see her in a totally different way.  The pack decided to let Devyn release the journal, she named it The Seduction and it came out on Oct 31.  I can’t imagine that I would ever get involved with a vampire after what I read.  They are sneaky, narcissistic, indulgent pains in the ass.  I’m sorry, can I say ass?  Pain in the butt.