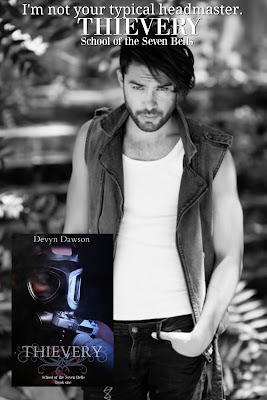 Enter to win one of 5 ecopies of Thievery, School of the Seven Bells.  One Grand Prize of a signed copy of Thievery!

When I became the headmaster of the School of the Seven Bells, I followed the rules that were set long before I came along. The only rules we break are those that involve thievery inside the borough. When my second in command, Alaric went out training a new pickpocket, he witnessed a girl stealing a scarf. Not only did he see her steal it, but so did an enforcer. The borough doesn't tolerate thieves and sentences them to death by hanging before the sun comes up the following day. He helped her escape, and for the first time since I've been in charge, an outsider was allowed in our school. Someone is looking for her, and now the school is at risk. We can't allow her to die, but how many of us have to die trying to protect her?
.
Devyn Dawson delivers a fast paced epic tale of bravery and ambition. It's perfect for anyone who is ready for something different....

Read what reviewers are saying.

I normally don't read this genre of books but once I started reading it I couldn't put it down. I drained my phones battery so many times! The author did a phenomenal job of describing this new world she created so much so I could see everything in my mind's eye. Then there's the characters! I felt like I had known them my whole life and was right beside them every step of the way. Sometimes to the point of holding my breath! I loved every minute of this book and can't wait to read the next book! - Amazon Review

I loved the book. I have found my self reading different kinds of books. I felt like I was part of the story. Couldnt put it down. Makes me wonder if this could be the future. One never knows do we. Great writing-keep up the good work. Cant wait for the next one in the series ~ Amazon Review

I received an ARC for an honest review. Wow. What a strange world these young people have to live in. It does remind me of the world's in Hunger Games and Divergent where bizarre rules exist that benefit only the rich and powerful. Rebellion and subterfuge are the only means to survive. This book is about a school that teaches children how to steal, to be pickpockets, to fight. The school is hidden underground, outside the walls of the 'borough'. The cadets risk getting caught (and getting hung), each time they leave the school and sneak into the borough. It's a brutal world, where, parents, unable to pay an exorbitant child tax, must give up their newborn child to the government. The child, known only by a number, grows up in a sector, performing a lifelong job. The leaders of the underground school keep watch over the sector kids, determining which might benefit from a life at the school. Those children a kidnapped, whisked away by the school leaders to a new life if they want it. The characters in this book are easy to like. You want them to succeed, win, survive, steal, save each other, rescue, get the girl or guy they want. The world the author creates is disturbing, but colorful because of the characters and how they care about each other. Cliffhanger ending!!! When is the next book due out???? ~ Amazon Review


a Rafflecopter giveaway
Posted by Devyn at 4:05 PM